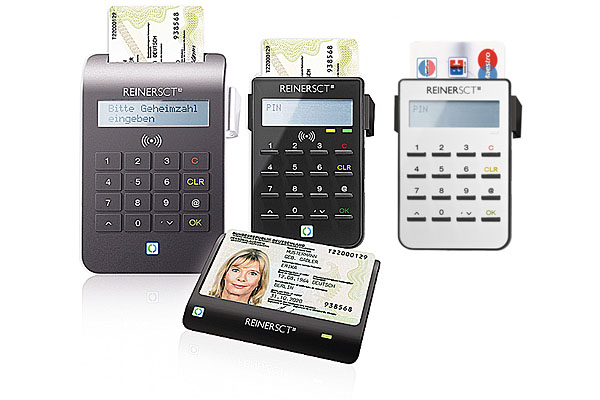 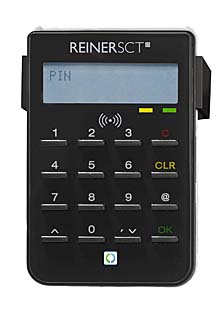 The cyberJack® RFID standard supports contactless RFID smartcards for applications such as the eID with the nID, cash card or eTicketing. Using contact smartcards it supports, for example, Online banking via HBCI/FinTS, secoders and EBICS as well as cash cards and qualified electronic signatures.

The cyberJack® RFID standard possesses secure, certified PIN entry for the eID function of the nID via PACE protocol as well as for all other contact smartcards. 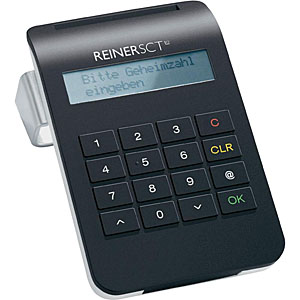 The cyberJack® RFID komfort combines excellent design with extensive functions. It supports almost all contact smartcard applications, such as Online banking via HBCI / FinTS, secoders and EBICS as well as cash cards and qualified electronic signatures. Equally, cyberJack® RFID komfort also supports contactless RFID smart cards and all their functions with maximum security, for example, the nID in conjunction with the ID cardApp.

Thanks to the fact that the authorised person and the authorisations are displayed on the big, illuminated LC display, you have full control over release of your personal data. Thanks to the secure PIN input via your own keyboard, the secrecy of your PIN is guaranteed at all times.

The modular firmware management permits the use of the cyberJack® RFID komfort in many applications; therefore, purchasing a single reader gives you a secure investment for multifunctional use over many years. 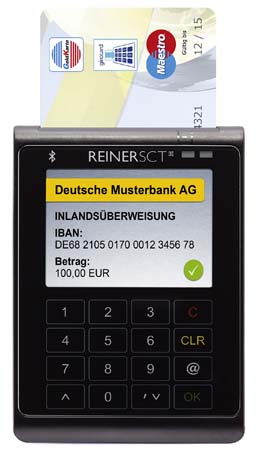 Inspite of all the work put in by the producers of Apps, tablets and smart phones, the security of an online transaction can only be guaranteed by a smartcard and a smartcard reader. The reader allows for a separate display of the transaction data and with HBCI / Secoder also a secure PIN entry. The elegant card reader cyberJack® wave opens the door as the link between smart phones and tablets for secured and easy mobile banking.

Thanks to the latest Bluetooth technology, the communication between your mobile devices has become simplicity in itself. You now have the comfort of carrying out home banking transactions from your armchair.

Regardless, whether you want to use the cyberJack® wave as TAN generator or as smartcard reader, more and more Apps utilise this secure process. 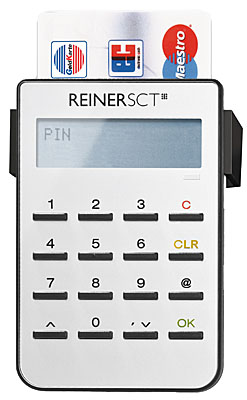 The cyberJack® secoder is the smallest and lightest member of the cyberJack® family. This smartcard reader was developed especially for convenient and secure Online banking with the SECCOS cash card.

The SECODER Standard was specified by the German credit services sector. The objective was to define a simple smartcard reader, optimised primarily for Online banking to safeguard Online transactions even better by means of data visualisation on the smartcard reader display. Therefore the cyberJack® secoder possesses a special security function to support the secure display of the Online banking transaction data. For example, you can see the recipient‘s account number and the amount of the transactions on your own display.

You can therefore immediately expose any offenders who attempt to manipulate the recipient account number of your bank transfer. This is because the cyberJack® secoder display is always separate from the one on your PC monitor and is therefore immune to manipulation by Trojans and phishing. In view of the fact that the cyberJack® secoder is a special smartcard reader for Online banking, for reasons of security the only applications it supports are those permitted by the SECODER Specification.

The SECODER acts quasi as a “firewall” for smartcard applications. So ask your bank, savings bank or software manufacturer whether the SECODER functions are supported.

The cyberJack® RFID basic was primarily designed for using electronic proof of identity by means of the new ID card, where the nID can be used as identification on the Internet. After the PIN is entered on the PC keyboard the RFID reader builds up a secure connection between the web application and the nID.

Authorised eBusiness and eGovernment service providers are permitted to read out personal data stored on the nID which are thus released for the purpose of identification and authentication. A typical use case for this is, for example, for inputting addresses and verifying identities by means of nID in dealings with an Internet shop in order to set up a customer account and to shop there.

Besides the applications of the nID, the reader also assists all other RFID applications, such as eTicketing with RFID cards. For convenience the nID can also be inserted into the reader at a 45° angle.